skip to main | skip to sidebar

Recently after hiking the Welch-Dickie trail, we went to the Common Man in Ashland, NH. To my delight, the head chef is vegan.

The staff went out of their way and concocted a half portion of vegetable sauté with quinoa pasta and lemon vinaigrette. Also, I had the bar make up a lemonade with muddled strawberries and mint. Yum!

Weekend in the Berkshires... in CT

So after spending the morning putting around Lenox, my mom and I left to meet my aunt and cousin at Foxwoods for a relaxing dinner. We went to CPK, a fav of mine when I'm in the area. There I got the Thai Salad with no chicken and extra avocado and a virgin pina colada. Numminess. After a lovely dinner, we bunkered down in our hotel room at the MGM, quickly falling asleep in the amazing beds. 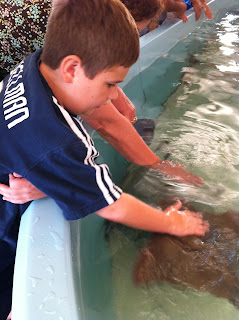 The next day, the our of us left for Mystic Aquarium, only about 20 minutes away. A new place to visit, and surprisingly vegan friendly, considering. (Apparently, one of the owners is a vegan). They had macrobiotic vegan dumplings and gluten-free fruit snacks. Win. I spent a brilliant day with my family then ran off to Boston for work.

But what a nice reality break.

Weekend in the Berkshires

Hoping to up my sanity points before diving headlong into my new Master's while working, I decided to go West.

The trip was supposed to involve camping in Tolland State Forest, while hiking nearby trails. And in the beginning it did.

My mother and I arrived later than expected (read: after dark) to the campground. Here we quickly set up camp and crashed out. In the AM, she struggled to start a fire with damp wood while I cut cantaloupe. Success on both parts though. We had tea and cooked lunch to pack. 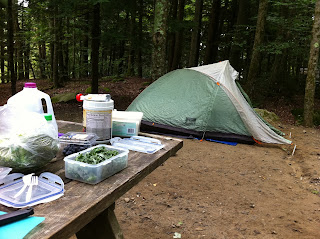 Seeing reports of t-storms in the evening we set off on our hike. We had intended to take Gilmore trail and then an access road to another trail that led to the top of a nearby mountain. But, nature had other plans. Instead we got to the beginning of the second trail and the skies became gloomy. Back we went, arriving to camp with a minute to spare before the downpour. 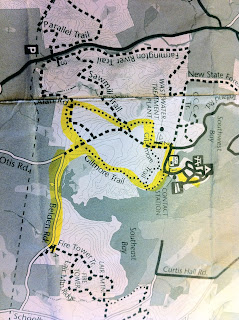 We quickly reserved a night at the local B&B, Brook Farm Inn in Lenox. A vegetarian inn with afternoon tea and homey accommodations. Good thing too because there was a funnel cloud seen two hours later in Pittsfield, maybe 15 minutes from where our tent was. Eek!

Once settled, we ate out for dinner at Firefly, a local trendy bar/restaurant with some veg-friendly grub. Lenox is surprisingly devoid of vegan friendly fare. We split the caprice salad (ask for the rock salt on the side). And I had the veggie burger minus the bun with sautéed mushrooms and a side of amazing sweet potato fries. Yum. Little on the pricey side but all in all a decent meal. 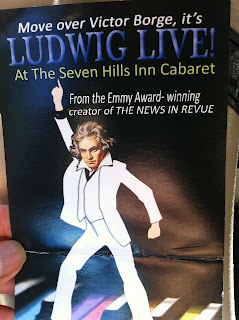 Then we were off to our evening's entertainment: "Ludwig Live". A cabaret show about Beethoven. It was cute and well performed. However, kitchy musical theater is not my favorite genre and I've seen the Jewish mother joke enough to be only slightly amused. My mother highly enjoyed the show and I just wanted to gear him keep playing the pieces. I think I need to get to see more live classical.


Anyway, I'm back at the inn and in need of sleep. Night!

Here is some recent work for a non-profit called Nurses Care 4 Haitian Children. Until I get a proper portfolio on this site - I'm adding it here. 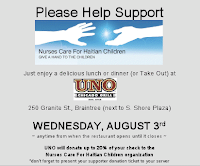 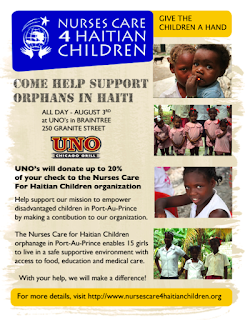 Put all ingredients in blender and blend. If you'd like, you could add soy vanilla yogurt for creaminess. 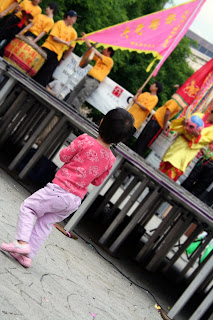 Overall, this week went fairly well. My cravings for sugar have diminished somewhat. On Wednesday night, I wanted to give myself a 'treat' so I have vegan chicken fingers, maki roll and soy ice cream... and I felt awful after. So, this week no treats quite like that. Maybe I'll try making something out of the Macro book.

Using the "Everything Guide to Macrobiotics" I put together this meal plan for the winter season. I'm branching out in terms of diet to try and kick this funk I have been in.
I have heard many good things about Macrobiotic eating and thought I'd give it a go. The other plus is that the foods are seasonal, so I can go local organic fairly cheap.

This blog is about my life and my pursuit of expression.
It explores traveling, culture, art, design, photography, poetry, veganism, blogging, Buddhism and above all, discovering what it means to live a deliberate life, full of contentment and passion. Read more »